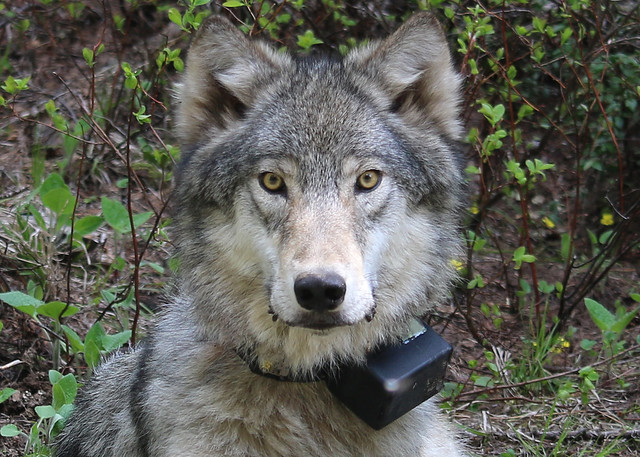 Last week was Wolf Awareness Week. In graduate school and here on The Ecotone Exchange I’ve written about wolf science and the legacy of wolves in Oregon and for Wolf Awareness Week 2013 I posted a commentary entitled “A Wolf’s Eye.” In the past few years, I’ve taught the essay “Lone Wolf” by Joe Donnelly, published in Orion magazine, about Oregon’s famous wolf OR-7, the first to disperse from his pack and travel over the Cascade Mountains since wolves came back to Oregon in the mid-1990s. My community college students not only found Donnelly’s article to be an excellent example of essay-writing, but fascinating.

Today, I read updates on the Oregon Department of Fish and Wildlife website Wolf Page and looked for current media coverage. Oregon’s wolf population is growing and their status is up for re-evaluation and possibly a big change–and soon. Currently, all wolves in Oregon are protected under the state’s Endangered Species Act; additionally, wolves in western Oregon are federally protected. A meeting to consider delisting them from protection under the state’s ESA is slated for November, this year.

Oregon wolves are managed under the state’s Wolf Conservation and Management Plan. At the end of 2014, our wolf population numbered 77 wolves. Now that there are eight breeding pairs that have produced pups for at least three consecutive years, Phase II of the WCMP is in place, triggering the move to consider delisting.

On one hand, delisting under Phase II of the WMP signals that wolves are thriving here on the landscapes of their once-home–wolves are a native species to Oregon:

“Wolves are native to Oregon. They were listed as endangered by the federal Endangered Species Act (ESA) in 1974. When the Oregon Legislature enacted the state’s own ESA in 1987, it grandfathered in all species native to Oregon that were then listed under the federal ESA, including wolves. This law requires the Fish and Wildlife Commission (and ODFW) to conserve wolves in Oregon. Also, Oregon’s Wildlife Policy directs the Commission to manage wildlife “… to prevent serious depletion of any indigenous species and to provide the optimum recreational and aesthetic benefits for present and future generations of the citizens of the state.” This includes a species as controversial as the wolf.” –ODFW.

On the other hand, delisting allows for killing of wolves at the hand of ranchers if they are caught in the act of depredation. Now, only ODFW can kill repeat offenders; as explained on the agency’s website, “Four Oregon wolves have been killed by ODFW or authorized agents in response to chronic depredations of livestock, including two in Baker County in September 2009 and two in Wallowa County in May 2011. In both situations, landowners and wildlife managers first tried a variety of non-lethal measures to avoid wolf-livestock conflict.” Currently, private citizens cannot harm or kill wolves.

Even though a reported 70 percent of Oregon citizens, according to the Statesman Journal, want wolves to come home, the conflict that spurred the wolf bounty and eradication remains and runs deep–generations deep.

I don’t live in wolf country–at least not yet, not until more of them trek over the mountains–and I know I’d be frightened and wary should I ever meet a wolf while camping or hiking. But I also believe wolves belong in Oregon. I believe in the ecosystems science that documents the benefits they provide as an apex predator–and if you’re interested in learning what wolves provide, I strongly suggest the film Lords of Nature.

More importantly, I fundamentally believe people cannot kill off everything in the way of human endeavor. We have hit the wall with that brand of progress mentality. 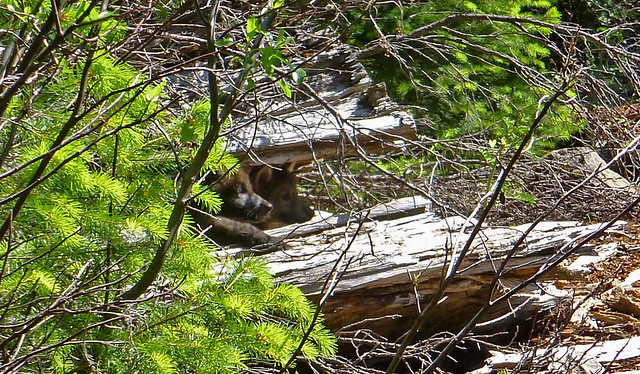 Last weekend, my partner and I watched the original, animated version of Dr. Suess’s  The Lorax. In it, Dr. Suess so very aptly illustrates what happens when species are sacrificed at the hand of industry. Though ranching in Oregon has not compromised the landscape to the extent that Mr. Onceler’s Thneed business did in The Lorax, the truth remains that Oregon wolves were killed off for one reason only–so that the ranching industry could take hold.

So how big of a problem are Oregon’s wolves to Oregon’s livestock? Not a big problem at all, according to OFDW’s depredation reports–for example, of the handful of reports filed in September, none showed signs of wolf kill, though one animal had been eaten by wolves, along with other predators and scavengers. And The Statesman Journal, in an article entitled “When the Wolves Return to Western Oregon,” quantifies 104 wolf kills of livestock since wolves returned to Oregon [in the mid- to late-1990s].

In contrast to the attitude that wolves are a huge threat for ranchers, Oregon Wild reports that the Eastern Oregon’s cattle ranching industry has shown significant economic growth concurrent with the arrival of wolves to that area of the state:

“Northeast Oregon’s Wallowa County is a case study for that very point. It is ground zero for the argument from wolf detractors that wolves will decimate Oregon’s livestock industry. The county’s livestock industry has been in a steady decades-long decline preceding wolf recovery. However, from 2009 to 2011 – while the wolf population grew from two to fourteen, livestock revenue jumped nearly 50 percent to nearly $27 million in a county with barely 7,000 citizens. Wolves were not the cause of the increase, but it’s clear their effect on the industry is negligible. Though wolves may have some localized impacts on individual livestock operators, those can be significantly reduced with responsible husbandry. Additionally, in Oregon, ranchers are fully compensated by taxpayers for any losses.” –Oregon Wild.

This chart puts into prospect loss of of livestock to wolf attacks:

Clearly, wolves aren’t a problem. Next month, on November 9, the ODFW Commission will meet in Salem to discuss the delisting of wolves in Oregon. Delisting–or taking away wolves’ protection as an Endangered Species–is a public process. This means your voice matters. ODFW cannot make rules or change the listing status of wolves without public input. Please send your comments to odfw.commission@coho2.dfw.state.or.us. Please make sure to include “Comments on Wolf Delisting Proposal” in the subject line of emails. Public testimony will also be heard at the meeting.

One of the most significant take-aways from graduate school for me was reading into  case studies of environmental legislation and coming to understand how important public comments are in the rule-making, or legislative, process. Speaking on the issue of wolf protection is a democratic opportunity; please let your voice be heard.

I’ll leave you with this famous passage from Aldo Leopold:

“My own conviction on this score dates from the day I saw a wolf die. We were eating lunch on a high rimrock, at the foot of which a turbulent river elbowed its way. We saw what we thought was a doe fording the torrent, her breast awash in white water. When she climbed the bank toward us and shook out her tail, we realized our error: it was a wolf. A half-dozen others, evidently grown pups, sprang from the willows and all joined in a welcoming melee of wagging tails and playful maulings. What was literally a pile of wolves writhed and tumbled in the center of an open flat at the foot of our rimrock.

In those days we had never heard of passing up a chance to kill a wolf. In a second we were pumping lead into the pack, but with more excitement than accuracy: how to aim a steep downhill shot is always confusing. When our rifles were empty, the old wolf was down, and a pup was dragging a leg into impassable slide-rocks.

We reached the old wolf in time to watch a fierce green fire dying in her eyes. I realized then, and have known ever since, that there was something new to me in those eyes – something known only to her and to the mountain. I was young then, and full of trigger-itch; I thought that because fewer wolves meant more deer, that no wolves would mean hunters’ paradise. But after seeing the green fire die, I sensed that neither the wolf nor the mountain agreed with such a view.” —“Thinking Like a Mountain”